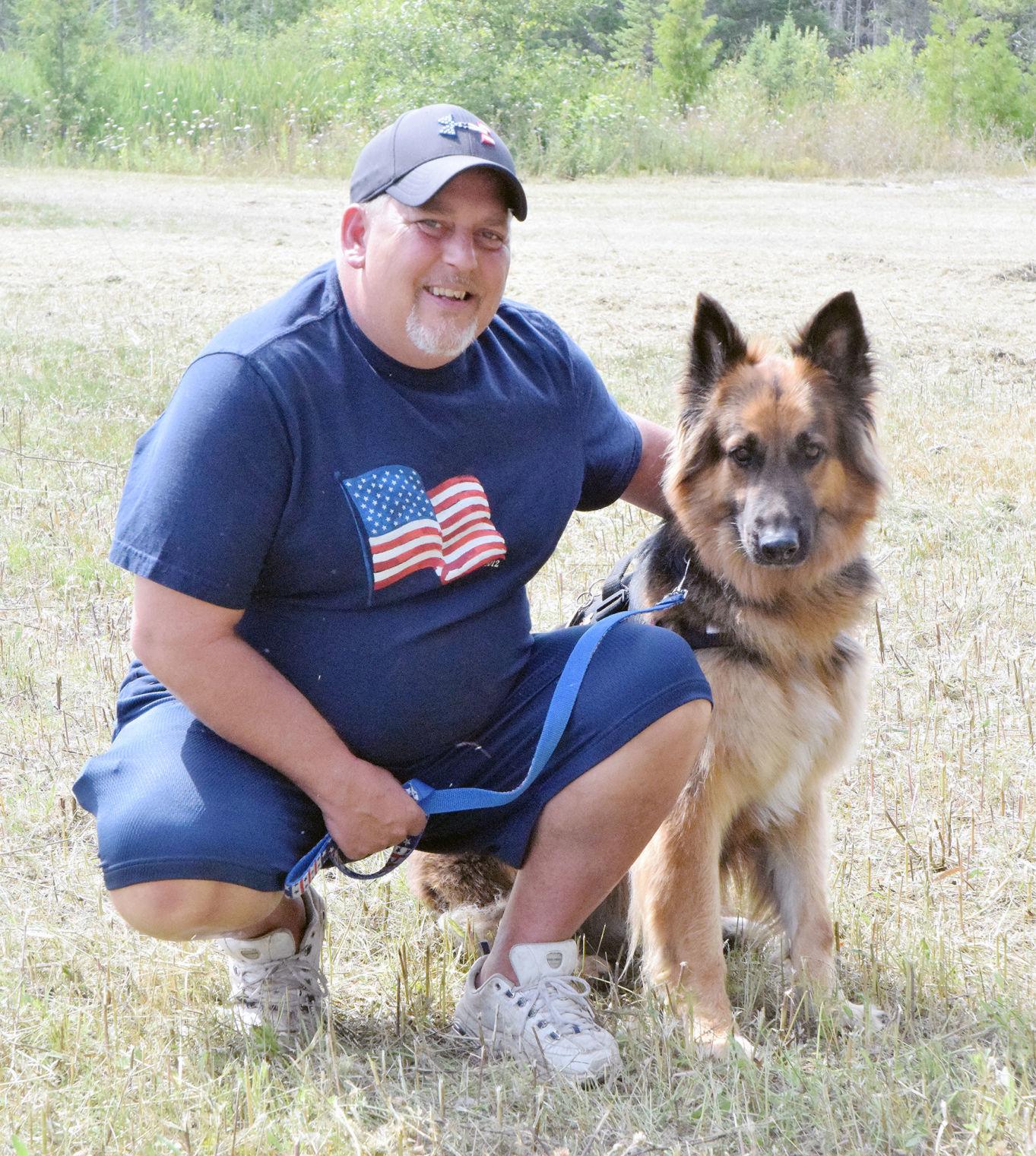 United States Army veteran John Daniels, 50, of Petoskey makes no bones about it.

After obtaining his service dog, Ryker — a 3-year-old German shepherd Daniels discovered through Canine Obedience Service and its owner, Ron Monroe of Reed City — his life has been saved.

“I wouldn’t be here without him,” Daniels said. “That’s the truth. He’s (Ryker) given me a lot of structure and helped me with so many things, he helps wake me up when I’m having nightmares, helps with accelerated startled response and because I have a spinal cord injury he leans on me and knows when I’m not stable.”

Daniels, who refers to himself as a “textbook child for Gulf War syndrome” and for two decades has dealt with a myriad of health issues, including post-traumatic stress disorder, was forced to retire from working in 2017.

“I’ve had more health issues, became diabetic, but I now have that under control and am now dealing with severe migraines,” Daniels said. “I’m still losing feeling in my hands and feet, and have balance issues which I may not be able to get back.”

While Daniels has been slowly regaining his independence — and more importantly, self-worth — with help from his four-legged friend and support dog Ryker, he’s hoping to help other veterans in need who may also be suffering.

Daniels is advocating for Mission Six Service Dogs for Veterans, a program started by Ron Monroe, which is committed to blessing military veterans with independence and healing that can only be realized through the service dog experience.

Monroe and his wife had been training dogs for more than 20 years and in 2017 began focusing exclusively on developing service dogs for veterans such as Daniels.

“Ron and his wife are the ones who started Mission Six, and I’m advocating for the northern area,” Daniels said. “We’re looking for people, veterans that are in need. Ron lives in Reed City, but his long-term goal is to move up here. When he retires he plans to move up here.”

Daniels said his first meeting with Ryker came when he was at hunting camp with Monroe and several other veterans.

“He was training dogs and said I needed one, but I didn’t think I did,” Daniels said. “At the time Ryker didn’t like anybody, except for me. He kind of chose me. At night, he’d sneak up and jump up onto my bunk. He took to me right away.”

The cost for a fully trained emotional support service dog such as Ryker can reach up to $15,000, and last year Daniels sought out various ways to fundraise for Ryker.

A classmate of Daniels, who is a 1988 Petoskey High School graduate, ended up making a considerable charitable donation through a tragedy of his own which ultimately helped Daniels secure Ryker.

“That (donation) is really something to say about the community and how it takes care of others,” Daniels said. “I never expected that at the time. It still chokes me up thinking of it. He and his family are such nice people.”

Daniels said Mission Six Service Dogs for Veterans has a training partner and fostering facilitator based in East Jordan with Ryan Wressell and his wife, Stacy.

“They’ll foster dogs for free training,” Daniels said. “Ron (Monroe) will help with baseline training and will do the final training with the veteran, but we’re looking to bring in other supportive people and we’re working on getting our (nonprofit tax status).”

Daniels said Ryker, who has been alongside him now for about a calendar year, is extremely intelligent and hard working, yet can also be a typical 3-year-old dog.

“You have to drive him like a truck, if you’re soft with him, he’ll do what he wants,” Daniels said. “He’s the alpha male, but Ryker and I were a great fit right from the start, and when we started getting more engaged, I went down and started doing training with him.”

It’s Daniels’ hope now that other veterans like him will have a similar connection with another dog.

“We’re looking for the next veteran and there’s a dog being trained right now named Cricket,” Daniels said. “I’m happy to help another veteran if I can.”

This site uses Akismet to reduce spam. Learn how your comment data is processed.